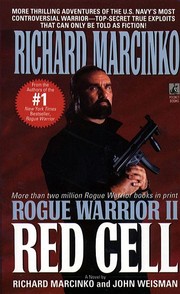 Rogue Warrior is an autobiography by career US naval officer Richard "Dick" Marcinko, who spent his career struggling to win acceptance for special warfare SEAL units within the Navy establishment.. It covers the early history of the SEAL units, his participation in the Vietnam War, the Iran hostage rescue attempt in and the U.S. invasion of Grenada and the founding Author: Richard "Dick" Marcinko. Red Cell: Rogue Warrior II Paperback – by Richard MARCINKO (Author) out of 5 stars ratings. Book 2 of 16 in the Rogue Warrior Series. See all 12 formats and editions Hide other formats and editions. Price New from /5(). Rogue Warrior, a fictional version of Dick Marcinko, ex-SEAL commander and his team of commandos and operatives struggling with terrorists and bad guys around the world: Book 1. Rogue Warrior. by Richard Marcinko. Ratings Reviews . As "ROGUE WARRIOR II: RED CELL" begins, Dick Marcinko is a freelance security consultant, playing terrorist at Tokyo's Narita Airport. Easily penetrating the facility's defenses, he engages in a deadly firefight with North Korean operatives,makes a discovery that plunges him into a secret war for America's national security/5().

A brilliant virtuoso of violence, Richard Marcinko rose through Navy ranks to create and command one of this country's most elite and classified counterterrorist units, SEAL TEAM this thirty-year veteran recounts the secret missions and Special Warfare madness of his worldwide military career — and the riveting truth about the top-secret Navy SEALs/5(93). A relentlessly paced audiobook that hurtles to its electifying climax, Rogue Warrior II: Red Cell is as good as a thriller gets. He's the man: take another thrill ride with the Rogue Warrior. © Richard Marcinko (P) Simon & Schuster. The Rogue Warrior book series by multiple authors includes books Rogue Warrior, Red Cell, Rogue Warrior: Green Team, and several more. See the complete Rogue Warrior series book list in order, box sets or omnibus editions, and companion titles. The first Rogue Warrior book I ever heard / read was Red Cell - this was back when that book first came out (mid's) and it blew me away - the story, the action, the detail, the overall content. This book I didn't feel was quite as good, but still entertaining none the less.